When I was growing up, canned refried beans were one of the staples that I could always count on to be in the house. I could always count on my mother to break them out once a week or so to make tacos, burritos, or some other south of the border delicacy that my brother, sister, and I gobbled up with gusto, despite the fact that I couldn’t help thinking that they looked like dog food when they first came out of the can.

Even to this day, refried beans continue to be a staple in my home. Of course, now that I spend half of my supermarket hours pondering over ingredient lists and nutrition labels, I’m always glad when there is a simple way to replace a processed food with an easy homemade alternative and refried beans were the first, not to mention the easiest, to transition from storebought to homemade. In fact, I would go as far as to say that this homemade refried beans recipe is the single easiest recipe in my repertoire. Lucky for me, they have a thousand and one uses and freeze beautifully. 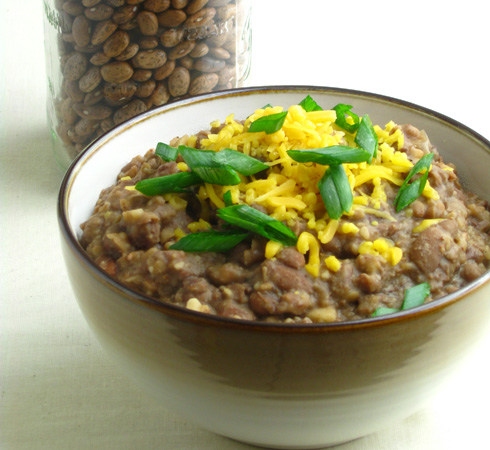 Not surprisingly, when you make them yourself, they are much better for you than the canned varieties you find in the supermarket, though they need to be refrigerated or frozen in order for them to keep. This recipe makes twelve servings.

Five minutes of effort and eight to ten hours of patience later, you have your very own mess of refried beans. I like this recipe quite a bit, not only because it lets you make your own homemade refried beans that are much better for you than the canned variety (not to mention cheaper), but also because it shows even the most skeptical cook that anyone can cook. Making refried beans is a simple, tasty introduction to slow cooking that is almost impossible to mess up.